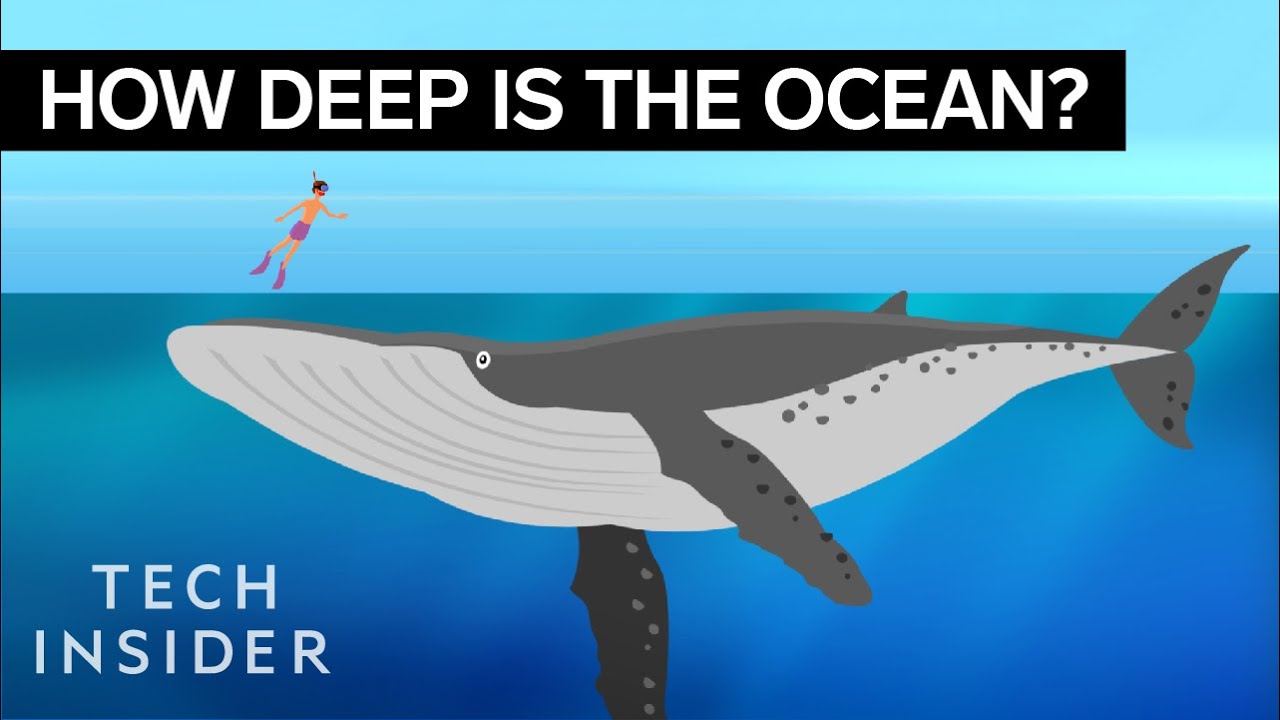 just how deep does the ocean go if he
took the highest point on land and
submerged it you would still have more
than a mile between you in the deepest
point in the oceans the oceans Harbor
ninety-nine percent of all living space
on earth and have enough water to fill a
bathtub that’s 685 miles long on each
side for scale here’s a human and here’s
a blue whale the largest animal on earth
blue whales usually hunt at depths of
around 330 feet within the well-lit zone
of the ocean deeper down at 700 feet the
USS triton became the first submarine to
circumnavigate the earth in 1960 at 831
feet we reached the deepest free dive in
recorded history down here the pressure
is 26 times greater than at the surface
which would crush most human lungs but
whales manage it diming to a max depth
of 1640 feet where they hunt giant squid
at 2,400 feet we reached the danger zone
for modern nuclear attack submarines any
deeper in the submarines hull would
implode 2722 feet down is where the tip
of the world’s tallest building the Burj
Kalifa would reach a little farther at
3,280 feet were deep enough that
sunlight can’t reach us we’ve now
entered the midnight zone many animals
down here can’t see like these eyeless
shrimp at 7,500 feet who thrive near
scalding hot underwater volcanoes at
this depth temperatures are just a few
degrees above freezing but the waters
around hydrothermal vents can heat up to
800 degrees Fahrenheit 9800 16 feet is
the deepest any mammal has been recorded
swimming the quv air beaked whale
but not even the qvr beaked whale could
explore the RMS Titanic which rests at a
staggering depth of 12,500 feet the
pressure is now 378 times greater than
at the surface yet you can still find
sea life like the fangtooth hagfish and
Dumbo octopus the deepest living octopus
on earth
at 20,000 feet is the Hadassah an area
designated for the oceans deepest
trenches like the Mariana Trench if he
tipped Mount Everest into the Mariana
Trench its summit would reach down to
29,029 feet
that still doesn’t compare to the two
deepest crewed missions in history in
2012 director James Cameron descended to
35,000 756 feet for the deep-sea
challenger mission but Cameron didn’t
quite break the record which was set by
oceanographer Jacques Piccard and
Lieutenant Don Walsh in 1960 Picard and
wash descended to the lowest point on
earth challenger deep at a record 35,000
797 feet below the surface since then
scientists have sent half a dozen
unmanned submersibles to explore
challenger deep including Keiko which
collected over 350 species off the
seafloor between 1995 in 2003 but
scientists estimate there are
potentially thousands of marine species
we have yet to discover humans have
explored an estimated five to ten
percent of Earth’s oceans we’ve only
just begun to understand the deep dark
world that flows beneath us